ESLint is a tool for establishing and enforcing patterns across a project to make code more consistent. It is a great tool to help enforce and clean up messy code.

ESLint works with any JavaScript projects that use Node (10.12 or above). Install ESLint in your project as a developer dependency with

ESLint is highly configurable, giving us the ability to turn on or off any of the rules that it enforces. For a basic setup, create a .eslintrc file now in the root level of your project and add the following

The first settings object, parserOptions is where we provide ESLint with information about what version of JavaScript / ECMAScript we are using. In this case, we are using the most recent ECMA version 2019, with ES Modules and JSX support.

The extends option is an array of rulesets that we want to apply to our project. These plugins are applied one after the other, so the later extensions will potentially overwrite previous ones.

To get started, I have added eslint:recommended which includes the basics. This is where you can also add plugins for libraries like React, Prettier, etc.

Each extends option applies a set of rules. We can overrwrite any specific rules we like in the rules object like so

Each property override accepts an array of two options: the severity of the error, and when to enforce the rule. Depending on the rule, the first value is generally "error" or "warn while the second value is "always", "none", a numerical value, etc. If you ever find a specific rule that you don’t agree with, or want to enforce, include it here.

If you only need to turn off a rule, not overrwrite it, add this syntax instead

or with a multiline ignore

Turning off rules can be helpful for dealing with unnecessary or annoying indivdual cases. It is generally recommended to learn why a rule is broken and fix it, though this is always an option as well.

The Env object specifies which environments we will be working in, which is generally the browser, node, or both. Specify the environents you are using in the env object like this

ESLint will run for every file in the project unless we specify to ignore certain ones. This is useful to avoid linting our dependencies and build folder. We can use the .gitignore file to do, if you haven’t already create one now and specify the folders you don’t want to lint

In order to lint in the command line, add add lint script to your package.json

This script will run eslint on every file, ignoring those in the .gitignore.   Run this script with npm run lint or npx eslint . to display any warnings and errors in the command line. 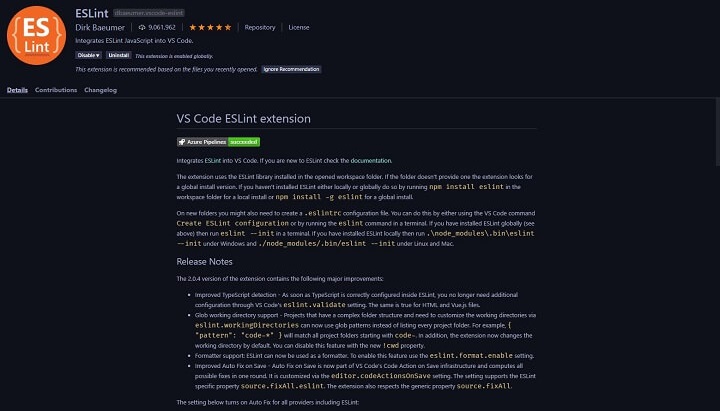 There is no additional configuration, and you should be able to see it working if you have any code that breaks your lint rules. It will even make files with errors and warnings in them show up as red on the sidebar.

This extension also allows you to sometimes fix, or disable rules in the editor as well. Hover over a red-underlined linting error and press CMD + . to see a dropdown of options.

In general ESLint is excellent at identifying large numbers of errors or inconsistencies in our code. This package can provide a great deal of resilience to your applications with minimal amount of setup.